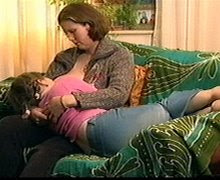 Well, not on Tyra Banks, but on her show! My dear friend Veronika Robinson will be sharing her thoughts on "full term" breastfeeding (breastfeeding beyond infancy) on Tyra's show this Thursday. Nursing in public will also be discussed. From what I understand, it would probably be best to take a few deep breaths prior to watching the show. Not everyone agrees with Veronika's theories (although I certainly do). Here is the description of the show that's posted on Tyra's site:

----
“Motherhood Controversy”
With her audience filled with mothers, Tyra hosts a no-holds-barred conversation about the pressures they face today. Tyra speaks with a woman who defends her controversial decision to breastfeed her kids until they were 8 years old, and a woman who believes it is acceptable to breastfeed her children in public. Then a young woman explains her desire to be a stay-at-home wife and mother -- even though her own mother raised her to be a career woman. Next, emotions get heated when stay-at-home mothers debate working moms on who makes the better parent.
----

If you're not familiar with Veronika's work I'd encourage you to visit her web sites, The Mother Magazine and VeronikaRobinson.com. Veronika frequently speaks about full term breastfeeding, homebirth and attachment parenting on television and radio programs in the UK, but I believe this will be her first US appearance. She and her family were also featured in the UK documentary "Extraordinary Breastfeeding." Click here to watch a clip of this controversial program.

While the reaction from Tyra's guests (and perhaps from Tyra herself) may be less than positive, hopefully at least a little bit of truth will get through!
Posted by Laura Shanley at 3:11 PM 2 comments: