How to Create the Birth of Your Dreams

Posted by Laura Shanley at 3:37 PM No comments:

From now on I will be posting my blog at www.unassistedchildbirth.com/blog. Please stop by!
Posted by Laura Shanley at 5:43 PM 1 comment:

Tune in tonight (March 19th) at 9pm Central as I’m interviewed by Gena Kirby on the Progressive Parenting show. We’ll be talking about unassisted childbirth, orgasmic birth, and the upcoming Trust Birth Conference.

After the show (at 10pm Central) I will be doing a half hour TV show on Vokle. One lucky TV viewer will win a copy of the second edition of my book, Unassisted Childbirth!
Posted by Laura Shanley at 1:33 PM No comments:

I so enjoyed being on the Jenny Hatch Show last week with my friend Lynn Griesemer, author of Unassisted Homebirth: An Act of Love! In addition to speaking about unassisted childbirth, we also talked about the current state of birth, Ricki Lake's film The Business of Being Born, and the updated version of my book, Unassisted Childbirth, which will be published in the US and France in February of 2012.
Posted by Laura Shanley at 7:20 AM 2 comments:

Writer and unassisted birther Jennifer Margulis posted a nice interview with me yesterday on her blog at Mothering magazine. Comments encouraged! Jennifer's own wonderful unassisted birth story is posted here. She also spoke about the birth last year in interviews with both the Associated Press and MSNBC.
Posted by Laura Shanley at 6:28 PM No comments:

Get Me Out: A History of Childbirth From the Garden of Eden to the Sperm Bank 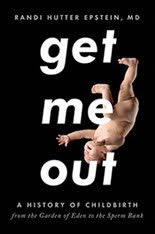 I’ve just received a copy of Randi Hutter Epstein’s new book Get Me Out: A History of Childbirth From the Garden of Eden to the Sperm Bank. I’ve been so busy I’ve only had a chance to skim the book briefly but it looks fascinating. I’m pleased to say that Randi devoted an entire chapter to unassisted childbirth! I can’t say that the chapter is entirely complimentary but she does have some good things to say about UC, and I’m thrilled that a mainstream writer has at least acknowledged that the concept exists! Randi has been a friend of mine since she first interviewed me for the 2002 article she wrote about unassisted childbirth for the New York Times. In 2007, Randi flew to Boulder (with bagels in hand) to interview me for the book. I wish her all the best with it! Below is a review of the book written by The Green Doula. To purchase of copy of the book visit RandiHutterEpstein.com.

Every once in a while I come across one of those books that I can absolutely not put down. To be quite frank, in the past, those books have been in the likes of historical fiction or Harry Potter (my literary guilty pleasure). Though I have come across several books about birth which I have found very informative, I had never felt the extreme urge to carry such a book with me everywhere I went till I finished its 300 pages in one weekend. That changed this weekend.

Author Randi Hutter Epstein, M.D. has unknowingly recruited me as her new enthusiastic fan. In her new book, Get Me Out: A History of Childbirth From the Garden of Eden to the Sperm Bank, Epstein weaves together a collection of well researched historical facts, fads, and tales into a very eye opening chronological history of Western birthing and women’s health care. I am often asked, “If the Midwifery Model is the ideal model, why are hospital births so popular? Didn’t obstetricians help make birthing easier at the turn of the century?”. This book answers those such questions and more in a shear way that neither left, right or middle wing can deny. This is not a book that dives into the history of midwifery. It is a definite eye opener bound to captivate its reader on the history of obstetrics and the unfortunate altered perception of “mainstream” birth today. I even believe that the male audience will find this book just as enjoyable/shocking as Jared Diamond’s Guns, Germs, and Steel. There are a lot of interesting parallels between the two books (I coincidentally started reading Guns, Germs, and Steel first till I saw this book in B&N on Thursday night). It will be clear after reading this we must fight harder for better birth choices ones based on respect and time based models such as midwifery. The case is undeniable. Why continue to let the legacy of characters like the J.P. Morgan and James Marion Sims reign (read their back stories in this book) over the ancient wisdom and traditions of woman’s past when it comes to our most cherish power and gift as women? Why continue with the sabotage?

This is definitely not a how to book or what to expect book, it is a full on historical book. But unlike our society, Epstein does not leave the important facts out (no matter how hard they are to swallow). She puts them front and center. I do feel that this book should be read by women and men alike to fully understand the foundation in which women’s health care (under the Western Model) was constructed under. This book will empower you to ask questions that you may have never even thought to ask and answer some questions that have been lingering for generations.

Epstein, a medical journalist for the New York Times, Washington Post, and more, has a refreshing talent for conveying weighty facts in a humorous digestible manner. She will also leave you with your jaw on the floor as a side effect of disbelief. Next time you walk by the Who Knew Section at Barnes and Nobles or are browsing on Amazon.com, pick up this compelling, powerful thought provoking must read.
Posted by Laura Shanley at 6:59 PM No comments:

Email ThisBlogThis!Share to TwitterShare to FacebookShare to Pinterest
Labels: freebirth, Get Me Out, Randi Hutter Epstein, unassisted childbirth

I’ve often heard midwives say that midwives were the original birth attendants or that midwifery is the world’s oldest profession (or second oldest profession, as the case may be). Some also claim that we know midwifery is “natural” because even animals have “midwives.” And while I certainly give midwives credit for helping women give birth - both now and in the past - none of the above statements are true. The original birth attendants were friends or family members of the woman giving birth.

Judith Goldsmith writes in her book Childbirth Wisdom from the World’s Oldest Societies that, “Many students of childbirth, however, speak of the midwife as woman's first helper. In reality, though, even the midwife is a relative newcomer on the scene. In those tribal communities where birth is aided, the assistant is most commonly the woman's own mother.....A casual reading of anthropology does not always make these close family ties apparent, because often the European writer, seeing things in the light of his own background, referred to the person assisting the mother as the ‘midwife’ whether or not she was called this or considered as such by her own society. Further examination, however, reveals that the so-called midwife was very often a close relative of the mother, with no more special knowledge of birth than any other mother in the tribe. This underlines an important point: in a large part of the world, except in difficult cases, a birth required no more specialized help than the members of a woman’s own family could provide."

Michel Odent, M.D. echoes these sentiments in his recently released book The Functions of the Orgasms: “The concept of a birth attendant is more recent than is commonly believed, although a mother or mother figure was probably around when a woman was giving birth in primitive societies. This was mostly to protect the privacy of the birth woman against the presence of wandering men or animals. No doubt this is how midwifery began.”

Odent also claims that “Everywhere in the world there has been a tendency to dramatically alter the original role of the birth attendant, to deny the birthing woman’s need for privacy and to socialize childbirth. More often than not, the midwife has become an agent of the cultural milieu, transmitting its specific beliefs and rituals.”

Veronika Sophia Robinson, publisher of the UK magazine The Mother, expresses similar views in her book The Birthkeepers: Reclaiming an Ancient Tradition: “We’ve been led to believe that midwifery is the oldest profession, but this is a romanticized notion, and not a fact. It is perpetuated by practitioners of midwifery and childbirth. When assisted and observed birth did start becoming common place in our history, the attendant was not a specialist in birth, but most usually the mother of the woman in labour.”

As far as animals, some do give birth in the presence of other animals (although most seek seclusion). But these animals cannot be considered “midwives” in any sense of the word. As with tribal cultures, the animals “attending” are simply other members of the pack or herd. You can be sure that none of these “attendants” are sticking their paws inside the mother animal’s vagina, or telling her when and when not to push.

So why does this matter? It matters because as unassisted childbirth grows in popularity, I and other unassisted birth advocates are hearing from more and more midwives and midwife supporters who claim that we’re infringing on their territory or that unassisted birth isn’t “natural.” Some even write that (in the case of an unassisted birth gone wrong) we’re “giving homebirth a bad name.” But the truth is, not only is unassisted childbirth natural, it’s also safe, provided a woman doesn’t live in poverty, and the birth isn’t interfered with either physically or psychologically. Throughout history, healthy tribal women have successfully given birth without medical assistance.

I recognize that many women find the presence of a midwife helpful in birth, and I hope that midwives will continue to be available - to those who want them. But birth doesn’t “belong” to midwives. Nor does it belong to doctors, the AMA or the state. Birth belongs to mothers and babies – and ideally to fathers should they choose to be involved, and it’s time this truth was recognized.
Posted by Laura Shanley at 7:19 PM 19 comments: